Firstly, The Nike Pegasus is, by far, the most extended continuing running shoe series (excluding retro releases) in the history of the footwear industry.

The ’34’ suffix to the shoe name is a testimony to how long the Pegasus has been around. It won’t be far-fetched to say that the Pegasus is nearly as old as Nike.

So what makes the Pegasus so unique? But that’s asking the wrong question. The Pegasus isn’t amazing, and that’s perhaps its greatest strength.

The Pegasus is the footwear equivalent of the boy or girl next door – not the smartest or the most athletic, but someone you’re comfortable hanging around with all day.

Also, the Zoom Air bags provide a snappy feel under the forefoot and rear, and the outsole is as durable as they come. In other words, the Pegasus 34’s lack of uniqueness makes it endearing to so many.

The same can’t be said for the Structure, the Nike Pegasus’s stability counterpart. The Nike Structure has undergone many changes with all the enthusiasm of a swinging pendulum.

Some versions worked well, while others were flawed. But then, that’s a story for another time. So, for now, we’ll stay on topic.

Also, if you’re a long-time Nike user, you would be familiar with Nike’s biennial design update cadence.

Not much has changed since the Pegasus 33. The midsole and outsole stay the same, and all updates happen on the Pegasus 34’s new upper.

The upper changes aren’t significant and happen to be tiny tweaks made to the material and construction.

So if you’re not in the mood to pay new-shoe dollars for the Pegasus 34, it’s perfectly okay to stay with the 33 for another year. That would be a financially prudent decision, as the differences between the 33 and 34 do not amount to much. You can save plenty of money by getting the outgoing Pegasus 33.

In contrast, while the Pegasus 34’s upper resembles the previous designs, efforts have been made to align the aesthetic scheme with Nike’s ‘Breaking 2’ collection.

The Pegasus 34 is inspired by the clean lines of the Vaporfly 4% and the Zoom Fly. Thus, this inspiration extends to the large vents on the Pegasus 34’s engineered mesh upper and the ‘speed lines’ running over the side.

The Flywire cords are now concealed by the first layer of the engineered mesh, which contrasts with the Pegasus 33’s Flywire cords’ exposed design. Hiding the Flywire allows the 34 to move the Swoosh logo to a more prominent location over the center.

Moreover, the primary upper construction is similar to the last few Pegasus versions. A single mesh wraps around the shoe’s entirety, with another internal layer forming the half-sleeve attached to the tongue. There’s a hard internal counter in the rear, and the toe area has a plastic stiffener.

No change can be observed on the tongue and collar lining. The language is sparsely padded, and the collar uses a soft textile with a foam fill inside. The last two lacing rows are non-Flywire, and the reserve row can be used for heel-lock lacing when called upon.

The engineered mesh with larger-than-before vents is new on the Pegasus 34’s upper. Compared to the past few models, the forefoot has bigger pores, allowing improved splay and ventilation.

And while it is difficult to see from the outside, the internal toe bumper also appears to have gained height.

Also new are the flat laces and the exterior heel design. The Pegasus finally switches to flat laces with a minute amount of stretch, a much-needed improvement over the past models’ round laces.

We say this because the flat laces better distribute top-down pressure and stay tied down longer.

The counter gets additional urethane reinforcement over the sides and back. The teams are now covered in a transparent laminate (the same as what’s used on the lacing area), and the heel center has a thicker urethane with reflective strips over it.

This is one area where the Pegasus 34 is shortchanged; reflectivity is lower than the 33.

Furthermore, true to its once-in-two-year midsole design update cycle, the Pegasus 34 carries forward the same sole design from the 33 (which had a brand new single unit).

Also, the Pegasus 33 introduced an additional Zoom Airbag under the forefoot last year, which continues to be the case for the 34.

Nike’s EVA foam – Cushlon – forms the bulk of the 10 mm drop, single-density foam midsole, with Zoom Air bags embedded in the sole heel and forefoot cavities. Unlike shoes such as the Vomero, the EVA isn’t very soft and is tinged with firmness.

Outsole coverage is plentiful. Except for a portion of exposed midsole foam under the heel, the bottom is generously overlaid with durable and grippy rubber. The outer side has a series of ‘crash rails’ – pairs of rubber strips – for smoother transitions.

Not all complex Carbon rubber types are the same; the compound used in some brands lasts longer than others. We’ve rarely come across complaints about the Pegasus’s sole, and that’s because they usually stay very long. Nike’s formulation for its outsole rubber hits the sweet spot between delivering traction and durability.

Recommendable: You can now save money on the Nike Pegasus 34

You should be able to extract more than 400 miles with the Pegasus. Also, wear and tear will happen with the foam midsole and insole, though the Zoom Airbags will retain their cushioning as long as they do not accidentally deflate.

The double-layered upper is as durable as ever, so it’s unlikely that it will fail before the midsole.

However, the Pegasus switched to a slim fit after version 30, and the 34 is similar in many ways to the 31, 32, and 33. That said, there are a few welcome updates to the fit. As mentioned, the flat laces do a far better job sitting flush over the thinly padded tongue.

The Pegasus 33 was narrow, but the 34 relaxes the sideways fit ever so slightly. As a result, the new mesh material has larger vents, so there’s a bit of extra playroom on the sides. As a bonus, the Pegasus 34 is more breathable than the 33.

Moreover, we could be wrong, but the toe-box height also feels higher. We guess the internal toe-stiffener is raised over the 33, freeing up a bit of vertical room. The heel fits and feels the same in the back, with the overall heel-to-toe sizing being accurate. 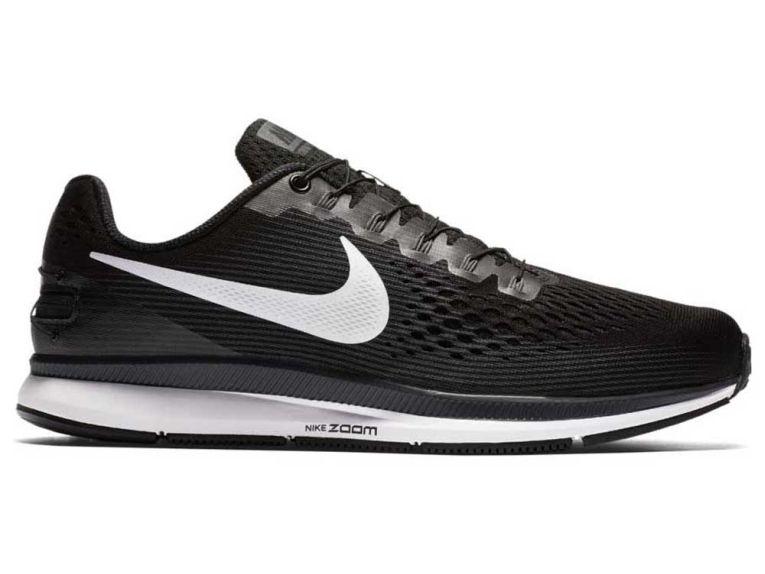 Moreover, moving most of the Flywire between the upper layers also means that the cords are closer to the foot. You can sense this change as the thin lines strain against the foot when laced tight.

The heel provides a secure grip. The internal heel counter delivers the necessary support, and the padded collar wraps the foot without slippage.

You’ll be disappointed if you expect the Pegasus 34 to be a soft shoe. The Pegasus 33 and 34 are firmer even by version 31 and 32 standards, and that’s because of the extra Zoom Airbag added to the forefoot last year.

The removable insole and the foam lasting below it provide the only layer of perceivable softness. The foam cavity under the heel also splays when loaded, adding to the cushioning experience.

The Zoom Air bags add a high degree of responsiveness, but the trade-off is the loss of softness, especially at lower speeds. Hence, at a higher pace (faster than 5 min/km), the Zoom Air bags add plenty of springy feedback to the Ride, regardless of whether you’re a forefoot or heel striker. Furthermore, most runners would describe the Pegasus as a stiff shoe, which’s not far from the truth.

Push-offs feel quick on the Pegasus 34 (and 33), a trait that adds to the Pegasus 34’s versatile nature. The firmness and relatively inflexible forefoot contribute to the transition quality. The combination of standard foam and Zoom Air bags packs enough cushioning for grueling marathons, while the snappy feel makes the shoe suitable for shorter runs.

Undoubtedly, the Pegasus is a decently priced, well-rounded package. The Pegasus undercuts most competitors by $10 while offering a ride character that combines cushioning with plenty of springy responsiveness.

The upper has a seamless interior and a secure fit, both positive traits of a running shoe. The durable outsole is the icing on the cake.

All that said, the Pegasus isn’t perfect. We’re yet to warm up to the idea of the cord-based Flywire, which puts localized pressure over the side. This happens more so on the Pegasus 34, which moves the cords closer to the foot. Also, the 34’s heel reflectivity looks snazzier, but there’s less of it compared to the previous model.

The Pegasus 34 also seems (at the time of writing this review) to have dropped the Extra-wide (4E) version, previously available on the 33. Why?

SUMMARY AND CHANGES BETWEEN THE PEGASUS 34 AND PEGASUS 33

In conclusion, the ride quality didn’t change over last year, so it’s okay if you stick with the Pegasus 33. Both versions are equally versatile and comfortable with taking on long-distance runs as much as shorter bursts.

Meanwhile, the Zoom Airbags provide adequate cushioning along the shoe’s length and a snappy feel.

However, all changes take place on the 34’s upper. Here’s a list of the updates: The laces change from round to flat, the new engineered mesh high is more breathable and slightly roomier, and the Flywire cords are now placed closer to the foot, causing a reduction in heel reflectivity.

There is a slight difference in shoe weight; the Pegasus is a 0.4-ounce lighter.

With the Nike Pegasus receiving two Zoom Airbags, there’s reduced differentiation between it and the higher-priced Vomero 12. But you’ll still get extra cushioning due to the blown rubber outsole and a slightly softer midsole foam. Remember that the Vomero 12 fits noticeably narrower than the Pegasus 34.

The Zoom Winflo 3 is an entry-level neutral shoe with a lightweight build. Flywire and engineered mesh serve as a design tie-in with more expensive Nike models, and a heel-only Zoom provides snappy cushioning for rearfoot strikers.

The Lunarepic Low 2 and the Pegasus and Streak 6 make for a wholesome running shoe assortment. The Lunarepic offers a softer and more differentiated ride than the Pegasus, while the Streak 6 is excellent for fast runs and races up to a half-marathon.

Last year, we recommended the Adidas Ultra Boost as a more cushioned companion to the Pegasus. That changes this year due to the introduction of the much-softer Supernova.

You can rotate the Adidas Supernova for long and easy runs alongside the relatively firmer Pegasus 34.

The durable and snappy Adidas adios 3 performs best for fast-paced runs. Say, races from 5K up to a half marathon.

The Pegasus 34 compares to others in the mid-priced, neutral cushioning class of running shoes.

Similarly, The Saucony Ride 10 is the closest in terms of overall character, and the Underarmour Speedform Gemini 3 is a close second. Both shoes are different in many ways, though. Hence, the Ride fits narrower and has a flatter ride quality, and the Underarmour is a firmer shoe with a slimmer upper.

Others, like the Brooks Ghost 9, provide a cushioned and supportive ride without being noticeably soft or responsive. And there’s the quieter riding Asics Cumulus 19 and the New Balance 880V7 with their engineered mesh uppers.

Lastly, Mizuno’s Wave Rider 20 is not cut off the same cloth as the others, thanks to the plastic Wave plate and the firm midsole foam. Nonetheless, a neutral and supportive running shoe it very much is. 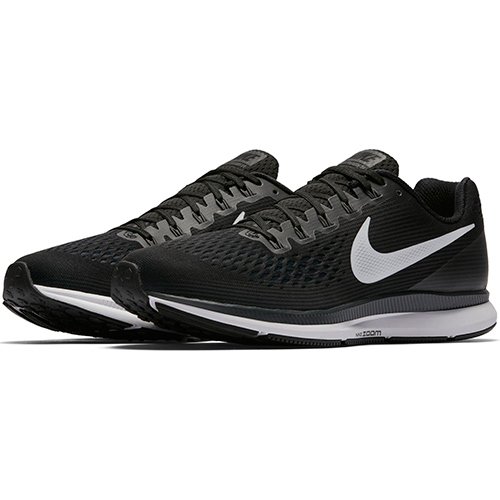 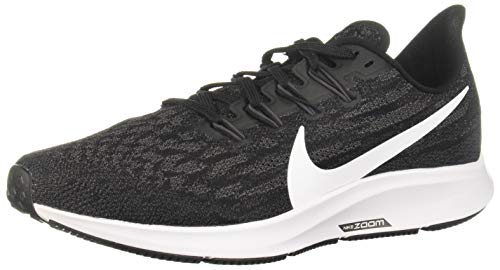 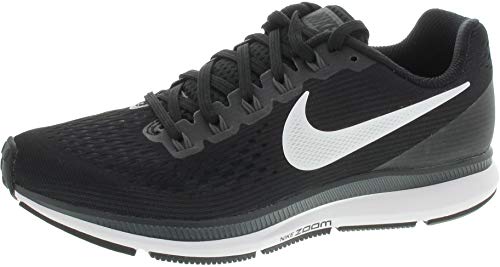 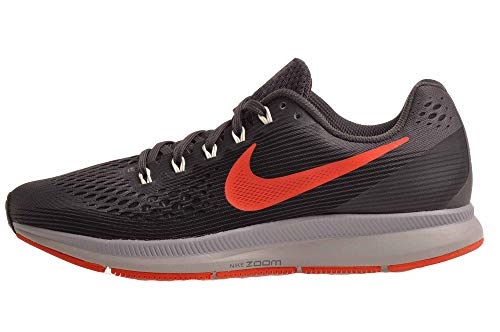 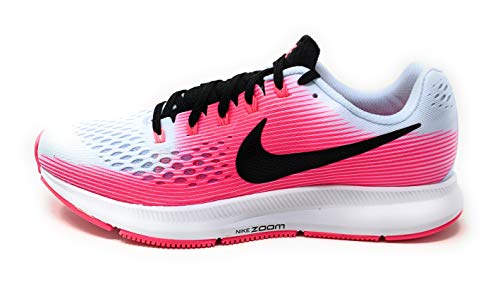 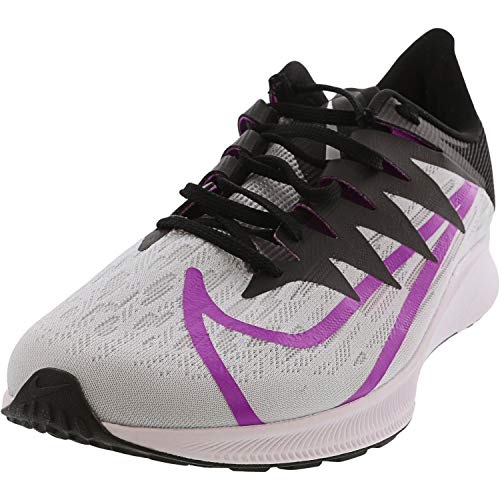 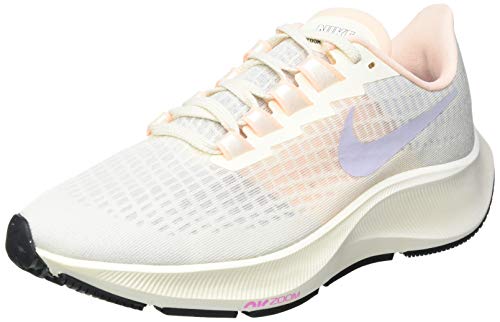 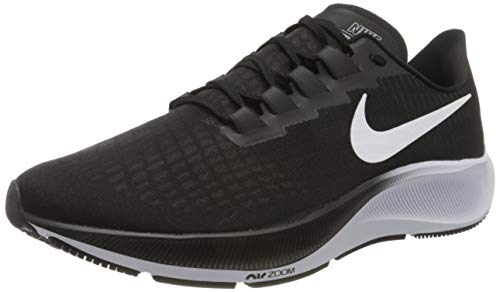 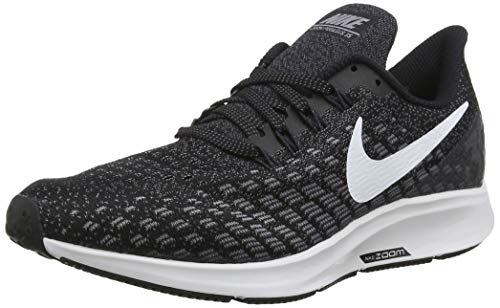